From Judgment to Compassion: The Superego (Inner Critic) In Spirituality & Conflict Resolution

In order to move to a place of compassion we each must dissolve the internal psychological structure known as the inner critic or superego.

This post, the first in a series, discusses this core work on the path of integrating psychology, spirituality and conflict resolution.

We begin with the first step in this process: learning to recognize the inner critic inside.

For a related post on the superego (inner critic) and interpersonal conflict, press here.

The Inner Critic/Superego: Obstacle on the Spiritual Journey and During Conflict Resolution

The human tendency to judge ourselves and others poses formidable problems in every area of human endeavor, including mediation, client counseling, coaching and spiritual practice.

For spiritual practitioners judgment is a problem because, although “it is in the very nature of the mind to compare and evaluate,”  [1],  judgment takes us out of the present moment.

Accordingly, in many spiritual practices, such as mindfulness, practitioners are told to “cultivat[e] a non-judging attitude toward what comes up in the mind, come what may.”[2]

But this is not an easy task.

In work with other people, whether in coaching or in mediation, the capacity to move beyond judgment is indispensable.

People feel and  know when they are not being judged.  It is actually a rare experience.  A sense of greater openness and trust occurs quite naturally and quickly when it occurs.

This is where psychology, spirituality and conflict resolution meet.

Unfortunately,  as A. H. Almaas (Hameed Ali) has explained, our tendency to judge is so automatic that we often confuse it with  true conscience or discrimination. This can block our deeper, inherent knowing of what is or is not appropriate or to establish real relationships capable of producing real change.[3]

The Inner Critic Has Many Names

In the West, it was Sigmund Freud who discovered there is in each of us an internal critic that watches and judges us.[4]  He named it the superego.[5]

For Freud, the superego is only one of the three major structural elements of the psyche.  As shown below, the other two are the “id” (roughly, the libidinal and instinctive drives), and the “ego,” (roughly, our ordinary sense of who we are).

As many people have found,  however, one can profit from understanding and working with the superego/inner critic without being a Freudian.

In popular parlance, the superego has been called the inner critic,[6] judge,[7] the voice of judgment,[8] or the accuser.[9]  The terms inner critic and superego will be used interchangeably here.

There are many theories about how and why the inner critic in us develops, including those articulated by Freud,[10] and others,[11] including recently, neuropsychoanalysts.[12]

Characteristics of the Superego/Inner Critic 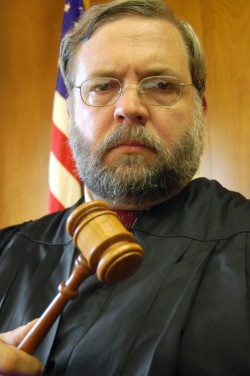 For our purposes, the important point is to learn to recognize and work with this psychological structure within.  The superego/inner critic:

The Superego is A Psychological Mechanism, Not a Person Inside Your Head

But this is misleading. It causes us to overlook one of its most important characteristics: it is the master of the double bind.

Stated another way, people often overlook the fact that the superego/inner critic is a psychological mechanism that performs the function of judging automatically. It is not necessarily logical or consistent.

The superego/inner critic therefore can and frequently does judge us negatively for both doing and not doing the same act.

Do and Don’t Eat the Ice Cream To take an example suggested by Faisal Muqaddam say we feel like having ice cream.

The superego comes in, judging us for failing to “really live life,” and urges:

“Go ahead and have the guts to eat that ice cream for once.  Live a little.”

During and after indulging in this little treat, we may then hear a new voice saying:

“You know you should have stayed on that diet. No wonder your blood sugar is crashing.”

In other words, we are “damned” if we do, and damned if we don’t. 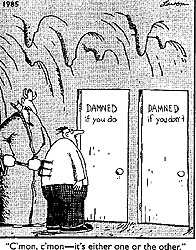 Yet, we often fail to recognize this “no-win” situation because the voice of the inner critic/superego ostensibly seems so “logical.”

The Superego in Conflict Resolution

Beyond the Superego:  A Musical Offering

Subsequent posts will discuss the superego/inner critic, and its role in conflict resolution and spirituality, in greater depth. Topics covered will include:

[3]  This paper draws in part upon the work of Faisal Muquddam and A. H. Almaas (Hameed Ali), the heads of the Diamondlogos and Ridhwan schools, respectively. Relatively little has been written about their work from the specific perspective of working on the superego.   Almaas (Ali) wrote a brilliant, small work called “Work on the Superego,” published in 1992.

However, Elizabeth Bader has concerns about that part of Almaas’ (Ali’s) discussion that focuses on conflict resolution, particularly the suggestion that the counselor working with couples in conflict should consider “playing out” a party’s superego. Elizabeth’s concern is that the party might experience this as, in effect, attacking him, regardless of the counselor’s good intentions.  Further, while a rare counselor or mediator might be able to do this skillfully, few counselors have the expertise to do this well, or with sufficient humility.

Another excellent book, written by one of A.H. Almaas’ students and associates in the Ridhwan School, is Soul Without Shame: A Guide to Liberating Yourself From the Judge Within, by Byron Brown (1999).

[12] See Robin L. Carhart-Harris et al., “Mourning and Melancholia revised: correspondences between principles of Freudian metapsychology and empirical findings in neuropsychiatry,” Ann. Gen. Psychiatry, available from http://www.annals-general-psychiatry.com/content/7/1/9. (“It is highly unlikely that the ego ideal/super ego is housed in any specific region of the brain but we may speculate about dynamic physiological processes paralleling psychological ones.”)  Some people have also rejected Freud’s concept of the superego for reasons outside the scope of this paper.

[13] Freud, supra note 4 at 37, and note 6 at 100.  (The function of the superego “consists in keeping a watch over the actions and intentions of the ego and judging them, in exercising a censorship.”)