The Superego (Inner Critic) and Mediation

It is a true joy to live a life free of a punitive superego (inner critic).  A life which includes a measure of good will for all.

In a companion post, I invite you to sample these feelings of good will through music.

Strategies for dealing with the superego will be discussed at another time.

In a previous post, the basic structure and function of the superego was described.  The superego (inner critic) often drives interpersonal conflict because:

Due to the fact that the superego (inner critic) seeks to define who we are, it often engages in “good me/evil you” thinking.  This is related to another of its main tasks: to control aggression.

Paradoxically, it often tries to control aggression by turning it against oneself.[1]  But this does not mean aggression always remains confined within the individual.  Instead, fueled by the superego, it may be projected outward toward others.   This is a major source of interpersonal conflict.

For example, a party’s superego may feel justified in judging an adversary as immoral or unscrupulous — while fostering the illusion that the judging party is more moral, and more righteous.  The judging party’s own negative qualities are then projected onto others and expressed as a devaluation of them.

This occurs, for example, when two attorneys deal with discovery requests in a strategic manner, but each indignantly accuses the other of being unethical.

THE SUPEREGO: THE MIND’S “LAW-ENFORCING AGENCY”

According to some theorists, the superego — the mind’s “adjudicating and law-enforcing agency” — is the psychological foundation for the rule of law.[2] 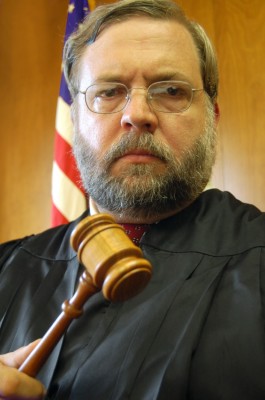 Thus, the community, like the individual, can be said to have a superego.

Perhaps that is partly why parties in conflict often seem to embrace the superego’s primitive judgments as a source of support, regardless of how harsh the judgments are.  The superego’s (inner critic’s) simple albeit often primitive dictates bring back a familiar feeling of certainty.

The superego (inner critic) may also play a role in the preference for a “judge” as a mediator.  Parties may select mediators who are judges for many reasons, including the outstanding quality of the individual involved.  However, for some people, insisting on using a “judge” as a mediator is an expression of their desire for the security of a superego/authority figure.

THE SUPEREGO (INNER CRITIC) CAN MAKE A FAIR COMPROMISE DIFFICULT

During impasse, for example, parties must confront the fact that their previous expectations for settlement will not be met. [3]  Superego (inner critic) judgments come in harshly because the client’s “ideal” has not been met.[4]

The classic example is the male party with a macho superego who blames himself for being too “weak” when the other party does not agree to his demands.  This makes it difficult for him to compromise.

On the other hand, as discussed by Leyla Navaro  in this blog, a woman may endeavor too hard to be “nice” — causing her to give away her autonomy. The superego in that case is attempting to enforce a “feminine” identity. But when women are in conflict, this too distorts the process of working through to a fair settlement. It may cause a woman to give in too easily.

After settlement, the superego may criticize the result and instill a sense of regret even when the result is good.  As the judging agency within ourselves, the superego continues to judge, in other words, whether things turn out well or not.  This may be an echo of our early, contradictory relationships to authority figures.[5]

THE MEDIATOR AS EGO?

In preparation for this article, I discovered an article on mediate.com in which Charles B. Parselle discusses the superego but also identifies the mediator as the ego — the one who mediates between the superego and the id.  Interestingly, Parselle speaks in terms strikingly similar to those I have used in my writings about the need for parties in conflict to come to grips with the “reality” of the situation  — to achieve what I have called “realistic resolution.”

Without doubt, there is some truth to Parselle’s analogy of the mediator to the ego. It is also refreshing to read an article discussing the deeper aspects of the psychology of mediation. I would argue, though, that Parselle gives too much credit to the ego.

From a Freudian perspective, it may be true that the mediator is the agent of reality testing, even when that is disappointing for the parties.

As I have tried to explain elsewhere on this blog, and in my writings, though, actually the situation is more complicated.  In fact to settle cases or resolve disputes as mediators we often have to let go of our egos – and our superegos—and simply allow the forces at work in mediation to help the parties face their situation and to allow the resolution to come forward.

To be fair, Parselle also recognizes this.  He emphasizes the importance for a wise mediator of following this advice: “Don’t just do something, stand there.”   He also acknowledges that the mediator’s own superego (and id)  may cause problems.

I would add, though, that the reality testing  and the “being there” we are talking about occurs in more than a Freudian sense.  It also has what I will call a spiritual dimension, a dimension of real growth, of the grown of a person’s being.

As discussed recently on this blog, this kind of moving beyond technique — this wu-wei or action through non-action — is the magic of mediation.

[1]  Leon Wurmser, “The Superego — Relevant or Irrelevant?”  in The Superego—A Vital or Supplanted Concept?” 24(2) Psychoanal. Inquiry 141-339 (special edition of essays on the superego ed. by Leon Wurmser, 2004) at 183, 199. “(Thus, the overpowering superego has to serve as a necessary defensive barrier against the intolerably dangerous aggressions.  This is done with the readily observable defense of turning the rage, the hate and especially the contempt against the self.”); Sigmund Freud, The Ego and the Id 56 (trans. Joan Riviere, rev. and ed. James Strachey, 1960).

[2] See Jose Brunner, “Freud and the Rule of Law: from Totem and Taboo to Psychoanalytic Jurisprudence” in Michael Levine, The Analytic Freud: Philosophy and Psychoanalysis 277, 285 (2000).  See also Sigmund Freud, Civilization and Its Discontents 106 (trans. and ed. J. Strachey, 1961, based on J. Riviere, trans. 1930).

[3] See my article, “The Psychology of Mediation: Issues of Self and Identity and the IDR Cycle”  10(2)  Pepperdine Dispute Resolution Law Journal  183 (2010) available at www.elizabethbader.com/SelfandIdentity.pdf.

[4] One of the superego’s functions is to strive for perfection, for the ego ideal.  Sigmund Freud, New Introductory Lectures on Psychoanalysis 67 (trans. & ed. J. Strachey, 1965).

[5] See Freud, supra note 2 at 30. (The superego’s “relation to the ego is not exhausted by the precept: ‘You ought to be like this (like your father).’ It also comprises the prohibition: ‘You may not be like this (like your father) . . .’”); cf. also Timothy Butler, Getting Unstuck: How Dead Ends Become New Paths 34 (2007). (Accuser can cause “deep-seated regret about choices made and opportunities missed.”)

Elizabeth Bader, “The Psychology of Mediation: Issues of Self and Identity and the IDR Cycle”  10(2)  Pepperdine Dispute Resolution Law Journal  183 (2010) available at www.elizabethbader.com/SelfandIdentity.pdf.

Jose Brunner, “Freud and the Rule of Law: from Totem and Taboo to Psychoanalytic Jurisprudence” in Michael Levine, The Analytic Freud: Philosophy and Psychoanalysis  (2000).

Leon Wurmser, “The Superego — Relevant or Irrelevant?”  in The Superego—A Vital or Supplanted Concept?” 24(2) Psychoanal. Inquiry 141-33

« Beyond the Superego: A Musical Offering» On Self-Remembering